Where it all began…

Paolo spent the first 14 years of his life in Naples where he attended school, played soccer and got up to mischief, just like any other kid.

When Paolo was a teenager, his family decided it was time to venture to new lands. So they set sail on the Galileo, where Paolo and his brother Lorenzo made use of their musical talents by performing to the ship’s passengers. The journey to Australia lead them to discover their true musical talents.

When they arrived in Australia it was many years before Paolo decided to put his musical talent to use.

In 1969 Paolo made an appearance on the once famous show “New Faces”, and even though it was not a huge success, it did not stop Paolo from doing what he loved.

1979 was a year of poetry for Paolo. He wrote his own poetry and published a book entitled “If I…” It was evident then to Paolo that he had a natural writing talent, so two years later after the birth of his first daughter he put pen to paper yet again and published his second poetry book entitled “Endless Thoughts”

After publishing his poetry, Paolo took upon himself another challenge, song writing, but not only writing lyrics, also composing music. Paolo writes his lyrics in Italian, Neapolitan and English.

Paolo has the rare gift of being able to create a melody in his mind and then find the notes on the guitar or piano to then compose a song. The melodies literally flow from his mind onto his fingers until he finds the matching notes.

Over the last decade Paolo has been the real face of FDI. He has performed at many key locations and events such as the Opera House, Wesley Theatre and most recently performed at the Norton St, Festa.

With over 500 songs in his repertoire, Paolo still to this day continues to write captivating lyrics and endless music.

In 1958 Tony Buono together with his mother and sister boarded the ocean liner “Australis” bound for Australia to reunite with his father in Sydney who had been scouting a new home for them. Out of South America , Australia was the choice! Tony was six years old at the time.

Tony attended school in Sydney and took music as one of his subjects. His father was also musically inclined and played the piano accordion. When Tony was old enough to handle the weight he began to play the piano accordion too, however he did not find it rhythmic enough. At the age of 13 he bought his first guitar and with a few close friends started jamming together on the weekends.

Tony spent most of the seventies in Ischia Italy where he became involved with a few local bands, however they mainly wanted to play covers and this really didn’t interest Tony. He preferred just jamming as it was more original! He still kept in contact with the music scene on the island and was even asked to participate in an annual music festival which was held in Ischia. His group actually won the festival, however the prize was awarded to a traditional dance group to represent the region in a European contest as a bunch of long haired adolescents was not the image the organisers were looking for.

Around the mid seventies Tony returned to Sydney where he met Peter Paul Buhne. At the time Tony was experimenting with electronic and acoustic sounds with a long time friend and discovered that Peter Paul also had similar music interests.

Tony then returned back to Italy in the late seventies and then made his way through Asia and South East Asia, slowly making his way back to Sydney.

In 1980 Tony and one of his close friends decided to ship two large motorcycles to tour South America. During these trips Tony had his guitar with him and spent a lot of time jamming with the Argentineans and Brazilians. Over the years Tony has used riffs developed/created on these trips.

In the eighties they started recording their our jams on multi track magnetic tape and occasionally Peter Paul would record songs he put together, but it wasn’t until the early nineties , with electronics and sequences then available,  that Peter Paul and Tony finally go together to put down an array of tracks he had been working on over the years.

At the time this suited Tony well as he was basically an instrumentalist and Peter Paul’s lyrics allowed Tony to compose the bed tracks which ever way he wanted. With no restrictions so long as the lyrics worked they developed what they believed to be an original style of music. Around the mid nineties FDI – Fratelli D’Italia was formed as a result of this.

Eloise Buhne has been writing captivating lyrics since the age of sixteen. Together with FDI she has written various English tracks.

Her  writing skills were demonstrated during her time in which she wrote  articles for “Sono Siamo Italiani” which was published for approximately 2 years from 1999 – 2001. She also briefly reprised her role in 2010 when the magazine was relaunched.

Eloise has also provided backup vocals on various FDI tracks and in the late 1990’s and early 2000’s Eloise performed with FDI at various live events including the Italo-Australian Song Festival, Norton St Festa and for SBS Radio.

Eloise manages the administration for FDI including the implementation of the FDI website and is responsible for the management of all the online content where FDI appears.

Apart from her work with FDI she has been in operations management for several years. Those skills that she has developed have been utilized to ensure the organized and professional approach that FDI takes.

Maria Sgroi’s musical career began in 1968 at the age of 15 when she formed part of a musical group known as “I protagonisti’. Their first record was produced by the maestro and composer Detto Mariano with RCA Italy.  They stayed in the Italian Hit Parade top ten for three months.

In 1971 the group appeared at the Sanremo song festival however later in 1973 the group decided to go their separate ways. At this point Maria switched from being a lead singer to being a backup singer and part of the chorus for  the maestro Mariano where she featured on many records for some of Italy’s well known artists including Adriano Celentano, Albano, Romina Power and Cocis to name a few.

At that time she also formed an independent production company with established artists such as Franco Battiato, Loredana Berte’, Patty Pravo and many others.

In 1974 she joined forces with Franco Godi and together they worked on the production of jingles with such companies as Coca Cola, Kodak, Oransoda, Saocafe’, Dash, Baci Perugina and so many more. Maria also then become a record producer in her own right with the Italian band ‘I dragons’ which she produced for them an English album, as well as working with other bands.

From 1984 she began to write for television programs for children and by 1989 she started working for Mediaset (canale5, rete4 and italia1) in which she did dubbing of soap operas and cartoons. She also started writing musical lyrics, poems and her own memoirs, yet to be published.

In 2008 she met Peter Paul Buhne and Tony Buono, founding members of FDI (Fratelli d’Italia) and joined forces with them to become their project manager as well as a lyricist and writing articles in Australia for La Fiamma e il Globo in Italian.

In March of 2010 she presented “Bosco Dell’Anima” the latest musical project by FDI at the ‘Italian Institute of Culture Sydney. “Bosco Dell’Anima” is a musical journey through the region of Umbria with the poems of the renowned Italian poetry writer Cristiana Maria Sebastiani.

At present Maria is on her way to Italy preparing a presentation of FDI music with “Bosco Dell’Anima” as well as launching “Stimulation” (instrumental) the latest album, by summer of 2011. Peter Paul Buhne will be meeting up with Maria in summer to promote their music.

Shane is an experienced musician, engineer, arranger, composer and producer, and was born in Sydney Australia and has worked as a professional musician for many years. At last he has fulfilled one of his many dreams upon releasing the collaborative work, with FDI, “Tornare Alle Radici”. Especially after recording so many albums for other people-it has been a long time coming.

Shane has worked on many ethnic and Australian projects in his own studio and has experienced many different styles and ways of recording music. Music has always been his life and passion and to him it doesn’t matter what style or language it’s in, it’s all music!

This has certainly been a fascinating project and he has learnt a great deal and is very keen to use that experience in future projects. Quote “I guess it’s all about levels,you find yourself working for many years at one level then one day things seem to come together and the experience is very different, I am no longer quite the same person and seek newer challenges and experience, what is that? I guess it’s evolution”. 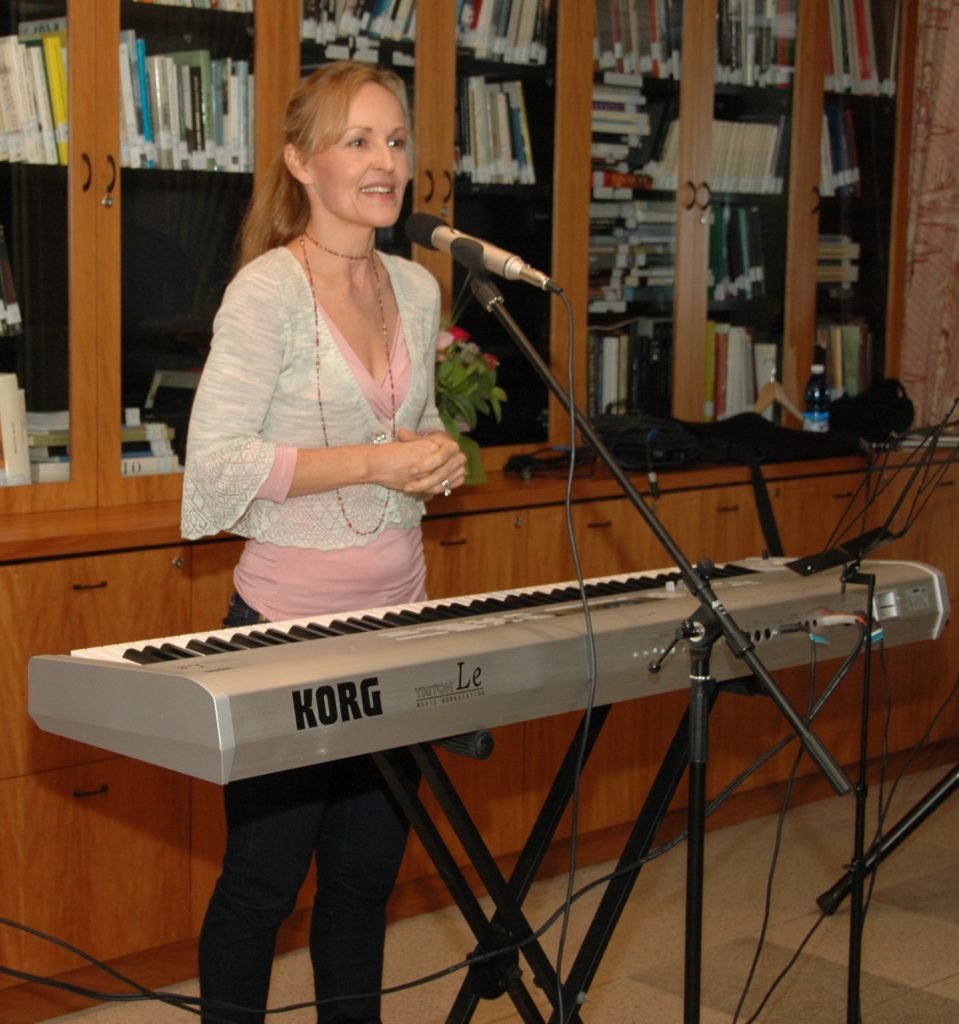 Tatyana has been writing original music, score writing for others and teaching piano and muscianship for more than 20 years. She has a degree in Music Education from the Sydney College of Advanced Education and is a member of the Australian Music Teachers Association (AMTA).

An avid student of ‘World Music’ she took advantage of a two year stint in South Africa to study the music and cultrue of both rural and urban indigenous communities.

She has written and produced a workbook and backing CD of original pieces for clarinet and flute students and is soon to complete her first album.

She has been score writing, arranging and performing music with Peter Paul Buhne and Tony Buono of FDI for the past four years.